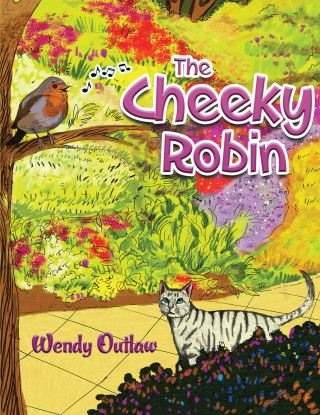 Cheeky is a very friendly and adventurous little robin. Every day he flies into the garden of a small girl, called Jane. She always recognizes Cheeky from the way he lifts his head to sing, puffing out his deep red breast, and rustling his olive-brown feathers. As soon as Jane sees him, she runs out with food and sometimes he hops right on to her hand to eat it. But there is someone who doesn’t like him in the garden at all and wants to get rid of him. Who could that possibly be? Who would want to harm a little robin? Then one day there was no Cheeky in the garden, or the next day, or the next. Jane knew something must have happened to him. It was a big mystery, where was he? What was he doing? Was he safe, or had some big animal eaten him up? Read the book and find out what really happened to the little robin.

Wendy Outlaw: Born in London, with four sisters and three brothers, Wendy now lives in Hampshire near to family. For some years, she worked with young children and enjoyed writing stories for them. She has always been interested in education and enjoyed visiting schools in Holland and Germany and meeting the children there. She loves gardening, quilting, table-tennis and music.