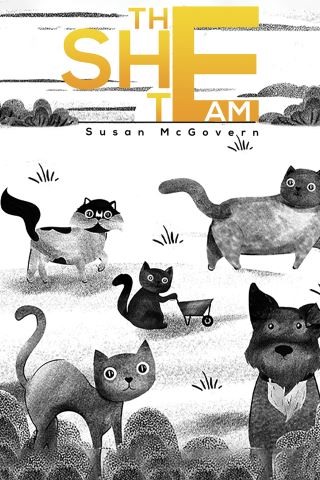 Five animals, four cats and a dog, are all black and white and are females, but they have two more things in common not apparent at first – they have all been treated badly in different ways by a number of humans and they all have a superpower which helps them to get away from the baddies. Two kind brothers, nine-year-old Diarmuid and seven-year-old Eoghan, rescue the cats Smig, Ebi, Trig and Róisín and the dog, Mags, and persuade their parents to take them all into their home. The animals do not like each other at first, but eventually Mags persuades the cats to abandon their differences and unite together to form The She Team. Her encouraging words, “Don’t get mad, get even!” convince them that they will work together to stop their tormentors from hurting other animals. They are confident that their superpowers will help them achieve their goal.

Susan McGovern: Susan McGovern lives in Dundalk, Ireland, with her husband Padraig, two cats and a dog. Guess their names! Yes – the cats are Trig and Ebi and the dog is Mags. Smig was a cat they had for many years, but she sadly died. “What about Róisín?” I hear you ask. She is Diarmuid and Eoghan’s cat. And who are they? Susan and Padraig’s grandchildren! And so you have met most of the cast of The She Team. The cast does not include Susan and Padraig, who, although slightly mad, are not mad enough to be in The She Team.