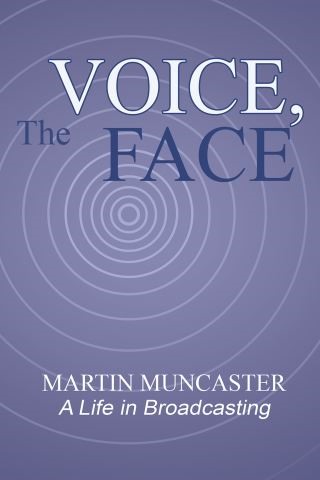 The Voice, the Face

A Life in Broadcasting

This is a quite extraordinary story. Martin Muncaster describes his life experiences in a way which has surprises in every chapter. He writes in detail, often with very personal and emotional descriptions, about many aspects of his family. The book starts with a life-threatening road accident followed by even more challenging incidents. He goes on to describe how, as a young man from a somewhat aristocratic family background, he had to adjust himself to life on the ‘lower deck’ for part of his National Service in the Royal Navy, but eventually, after much hard work and perseverance, acquired the coveted commission (and cap badge!). And it was this same determination and personal strength which carried him through the ups and downs of his life and his career in broadcasting.
Along the way, there are many lighter anecdotes, starting from his early days at stage school, then working as an actor in Canada before returning to pursue his career in television and radio. As a well-known presenter, he had an insight into the world of both commercial television and the BBC, and he describes his encounters with many well-known people including Sir Laurence Olivier and Richard Dimbleby. In the background throughout the book is the inspiration provided by his father, the renowned marine and landscape artist, Claude Muncaster.
There are also vivid descriptions of travel experiences in South Africa, Canada and Scotland, but it is all interspersed with family and personal tragedies which remind the reader that even familiar faces and voices have another private life we don’t know of.

Martin Muncaster: Martin Muncaster studied at the Guildhall School of Music and Drama, but before starting out on his ambition to be a broadcaster, he did his National Service in the Royal Navy, becoming an RNVR officer. Then after a spell being tried out as an announcer on the BBC’s General Overseas Service (now the World Service), he was advised to “go away and get some experience”. Taking this advice seriously, he took a ship to Canada where he worked with CBC on a range of radio assignments as well as appearing on the stage. On his return to London, he became an evening host on BBC-tv – in the days of Michael Aspel and Sylvia Peters, later presenting a range of programmes including Come Dancing and Songs of Praise. When ITV began in the 50’s, he was recruited in 1958 by Southern Television in Southampton as their main newsreader, announcer and reporter. He was the newsreader who opened the station, assisted by none other than Ian Trethowan, down specially from ITN. But when BBC South was created in 1960 to compete with Southern’s evening magazine, Day by Day, Martin was delighted to have the opportunity to move back to “the BBC” as the regular presenter of South Today. After some four years, he returned to London and the national scene to become one of the news-reading and presenting team for a decade, first on the old Home Service, then on Radio-4. Martin also had his own video company, Canopus Communications, Ltd., and was busy working on films and videos for commercial clients. He also took part in special events at many of Britain’s stately homes and castles, as narrator accompanying Caroline McCausland, a fine singer with a beautiful soprano voice. She was also expert on the guitar. Martin accompanied her musical presentations acting as reader of poetry and prose. He pursued his abiding interests in sailing, fly-fishing and the countryside generally and was regularly engaged as commentator for the fly-casting demonstrations at the annual Game Fair at various prestigious venues around the country. He was a regular contributor to the BBC Radio-4 “Waterlines” series with Cliff Michelmore, and also presented features on the famous “Countryside” programmes for more than 20 years. He found time, too, for a special interest in alternative and complementary medicine and was Chairman of the Working Party which later became the NCC (National Consultative Council of Alternative and Complementary Medicine). Martin was born in Sussex and was educated at Stowe. His father was the famous landscape and marine painter, Claude Muncaster, who went round The Horn in a sailing ship as a deckhand. He went on to paint several commissions for the Royal Family in the 1940’s including an impressive landscape commissioned by the King, which now hangs at Balmoral. Martin wrote a book, The Wind in the Oak, relating stories of his father’s fascinating life. Now in his 80s and living in Hampshire, Martin has found yet another career by investing in new film productions and thereby appearing in a minor role or as an ‘extra’ in a thriller named Cleanskin, starring Sean Bean. He was recently delighted to take part in a much larger production, Blue Iguana, a romantic, comedy thriller, with a ‘star’ cast, shooting scenes with no less an actor than Simon Callow.