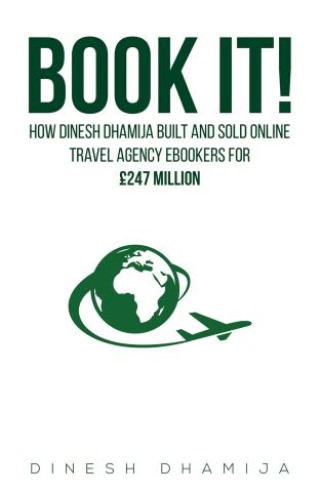 Entrepreneur, politician and philanthropist Dinesh Dhamija emerged from the recession-hit streets of 1970s West London to create, build and sell ebookers – one of the world’s premier travel agencies and a pioneer in the millennial dot.com boom, earning himself a £100 million fortune.
How did this son of an Indian civil servant, with no connections to the travel industry or technical background, end up with one of the most successful internet companies in Europe? How did ebookers withstand the serial catastrophes of the dot.com crash of 2000, the global travel freeze after 9/11 and the disruption of the US invasion of Iraq in 2003, outlasting and out-performing its rivals?
In his candid, buccaneering autobiography, Dhamija looks back to his globe-trotting childhood, his Cambridge University education and the hair-raising, energising, eyepopping rollercoaster ride of his business career. Not content to retire gracefully into anonymity, Dhamija then focused his energies and talents on politics, where his insider tales from Brussels and the Liberal Democrat party expose the looming Brexit disaster.
His insights into philanthropy, investment and entrepreneurship offer a rich diet of advice, observation and storytelling, spiced with anecdote and perceptive details.
Among the outstanding businessmen of his generation, Dinesh Dhamija’s life story is one of adventure, risk-taking, ambition and unique achievement across multiple fields.
Prepare to be entertained!

Dinesh Dhamija: Entrepreneur, politician and philanthropist Dinesh Dhamija created and built the pioneering online travel agency ebookers during the 1990s internet boom. Selling the company for $471 million in 2004, he founded two major Indian charities and supported the Liberal Democrat party’s anti-Brexit campaign, becoming an MEP in 2019. Today Dinesh Dhamija is developing a major solar energy project in Romania, along with several property investments. He lives on the Wentworth golf course in Surrey with his wife Tani, close to their two sons and one granddaughter.