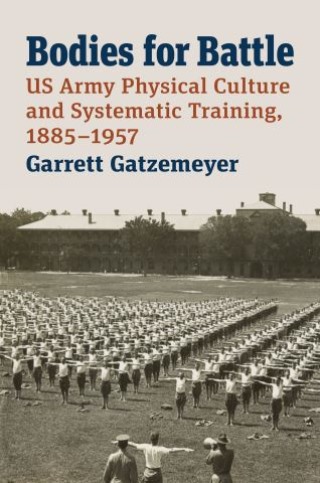 Physical training in the US Army has a surprisingly short history. Bodies for Battle by Garrett Gatzemeyer is the first in-depth analysis of the US Army’s particular set of practices and values, known as its physical culture, that emerged in the late nineteenth century in response to tactical challenges and widespread anxieties over diminishing masculinity. The US Army’s physical culture assumed a unity of mind and body; learning a physical act was not just physical but also mental and social. Physical training and exercise could therefore develop the whole individual, even societies. Bodies for Battle is a study of how the US Army developed modern, scientific training methods in response to concerns about entering a competitive imperial world where embodied nations battled for survival in a Social Darwinist framework. This book connects social and cultural worries about American masculinity and manliness with military developments (strategic, tactical, technological) in the early twentieth century, and it links trends in the United States and the US Army with larger trans-Atlantic trends.

Bodies for Battle presents new perspectives on US civil-military relations, army officers’ unease with citizen armies, and the implications of compulsory military service. Gatzemeyer offers a deeply informed historical understanding of physical training practices in the US Army, the reasons why soldiers exercise the way they do, and the influence of physical culture’s evolution on present-day reform efforts. Between the 1880s and the 1950s, the army’s set of practices and values matured through interactions between combat experience, developments in the field of physical education, institutional outsiders, application beyond the military, and popular culture. A persistent tension between discipline and group averages on one hand and maximizing the individual warrior’s abilities on the other manifested early and continues to this day. Bodies for Battle also builds on earlier studies on sport in the US military by highlighting historical divergences between athletics and disciplinary and combat readiness impulses. Additionally, Bodies for Battle analyzes applications of the army’s physical culture to wider society in an effort to “prehabilitate” citizens for service.