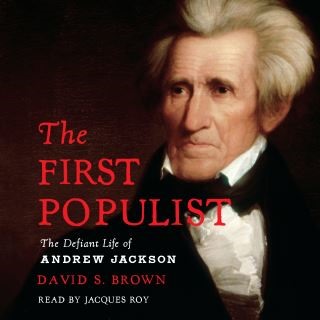 The Defiant Life of Andrew Jackson

A revelatory, timely, and masterful biography of President Andrew Jackson that offers a new perspective on this charismatic figure in the context of American populism—identifying the reasons for his unprecedented appeal as it shows us the man and politician in his full complexity.

A number of bestselling and award-winning biographies have been written about the seventh president of the US, but none have positioned Andrew Jackson so firmly in the forefront of the country’s populist tradition. Now, historian David S. Brown traces Jackson’s unusual life and legacy and sheds new light on his place in our nation’s history, focusing on his role as a popular leader.

Andrew Jackson rose from rural poverty to become the dominant figure in American politics between Jefferson and Lincoln. His reputation, however, defies easy description. Some regard him as the symbol of a powerful democratic movement that saw early 19th century suffrage restrictions recede for white men. Others stress his prominent role in removing Native American peoples from their ancestral lands, which were then opened to create a southern cotton kingdom, home to more than a million enslaved people.

A self-defined champion of “farmers, mechanics, and laborers,” Jackson railed against the established ruling order, fostering a brand of democracy that struck a chord with the common man and helped catapult him into the presidency—he was the first westerner, first orphan, and thus far the only prisoner of war to occupy the office.

Drawing on a wide range of research material, The First Populist takes a fresh look at Jackson’s public career, including the momentous Battle of New Orleans and the far-reaching Bank War; it reveals his marriage to an already married woman, a deadly duel with a Nashville dandy, and analyzes his magnetic hold on much of the country at the time.

Presenting a full portrait of a controversial American life, The First Populist offers a new way to interpret Jackson’s legacy, connecting “Old Hickory” to a longer history of division, dissent, and partisanship that has come to define our current times.

David S. Brown: David S. Brown teaches history at Elizabethtown College in Pennsylvania. He is the author of several books including The Last American Aristocrat, Paradise Lost: A Life of F. Scott Fitzgerald, and Richard Hofstadter: An Intellectual Biography.