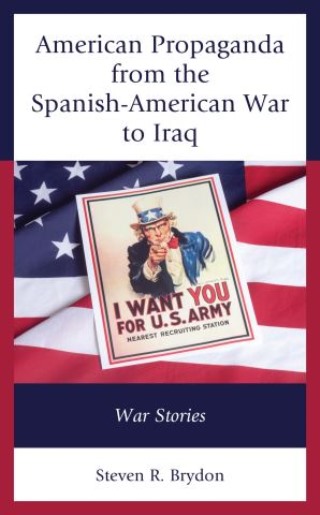 American Propaganda from the Spanish-American War to Iraq

In this book, Steven R. Brydon analyzes American war propaganda spanning from the Spanish-American War through the wars in Afghanistan and Iraq. Brydon argues that many of these wars were fought based on false or misleading narratives, beginning with blaming Spain for the sinking of the Maine and continuing, most recently, with charges that Saddam Hussein had weapons of mass destruction and was involved in the terrorist attacks of September 11. Research has shown that well-told stories can affect the public’s beliefs, attitudes, and actions, and Brydon has identified some of these recurring stories that have been told to support and sustain each war during this time period. Using Fisher’s narrative paradigm, Brydon critically evaluates these “war stories” to determine if they possessed narrative coherence and fidelity that provided good reasons to go to war, rather than simply the appearance of these qualities. The responsibility, Brydon stresses, is on the media and on academics to view future war narratives through a critical lens, in order to best inform the American people. Scholars of media studies, history, military studies, American studies, and international relations will find this book particularly useful.