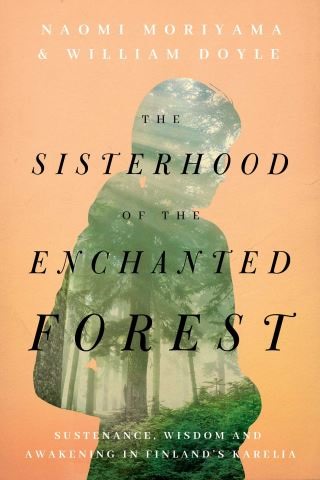 The Sisterhood of the Enchanted Forest

What would happen if you built one of the world’s most advanced societies inside a forest—and strove to make made women full partners in power?

After living for twenty-five years in New York, Naomi Moriyama moved with her husband and co-author William Doyle and their seven-year-old child to the vast forest of Finland's Karelia, a mysterious region on the Russian border that helped inspire J.R. R. Tolkien’s Middle Earth fantasies.

She entered a life-altering zone of tranquility, peace, and beauty, the spiritual heart of the nation ranked as the happiest nation on Earth, with among the world's most empowered women.

Finland is also the country with cleanest air and water and the best schools, a country where motherhood and fatherhood are championed by law, childhood is revered, schoolchildren are required to play outdoors multiple times a day, and trains contain mini-libraries and mini-playgrounds for children to enjoy.

It was here in the Karelian forest that Naomi found a culinary symphony of succulent wild edibles, herbs, berries, mushrooms and fish, all freshly plucked from the moss-carpeted forest and sparkling clear streams.

She also found something that changed her life—a tribe of invincible women who became her soul-sisters.

As an idyllic summer and fall gave way to a sub-Arctic winter of mind-bending darkness and cold, Naomi faced her fears and her future. Over the course of six unforgettable months with her family and her new “sisters”, she found her life transformed, and discovered the power that lay within her all along.

Then she tried to leave. But she kept coming back.

Come, take a journey deep into Europe's most distant, magical wilderness, and join the sisterhood of the enchanted forest.

Naomi Moriyama: Naomi Moriyama grew up in Japan and moved to Manhattan in her twenties. She is a U.S.-Japan marketing professional. She has coauthored three non-fiction books on traditional Japanese home-cooked meals and their health benefits with her husband William Doyle, and has been a judge on The Food Network’s acclaimed Iron Chef America, and a featured guest on The Today Show, The View, and Dr.Oz .|||William Doyle grew up in New York City and has produced TV programs for HBO, PBS, the History Channel, and A&E. Since 2015 he has served a Fulbright Scholar and scholar-in-residence at the University of Eastern Finland, as a Rockefeller Foundation Bellagio Center Resident Fellow, and as advisor to the Ministry of Education and Culture of Finland. His 2019 book Let the Children Play was co-authored with Pasi Sahlberg.