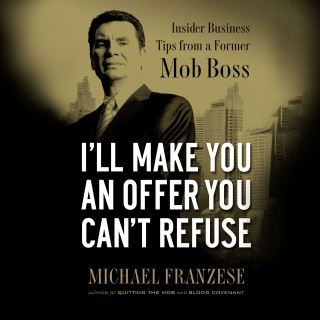 I'll Make You an Offer You Can't Refuse

What secrets can a former mob boss share about how to do legit business? Let’s have a sit-down and find out.

By age twenty-four, charming mob boss Michael Franzese was one of the wealthiest people on Fortune magazine’s survey. As one of the rare people who quit the mob and lived to tell about it, Franzese has a unique perspective on how business is done. And one thing he noticed was that the way he made millions per week in business inside the mob can be applied to doing business outside the mob (minus the illegal part):

“Anyone who sells the mob short when it comes to its ingenuity, its ability to connect with people from all walks of life, and its substantial profit margins is simply kidding themselves.” This book promises a mob’s-eye-view of business that will change the way you see business forever.

Michael Franzese was one of the mob's biggest earners since Al Capone, and the youngest individual on Fortune magazine's “Fifty Biggest Mafia Bosses.” Then, after dodging the law for years, Franzese pled guilty, accepted a ten-year prison sentence, and quit the mob.