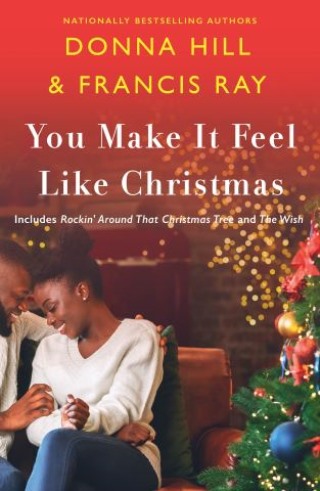 In You Make it Feel Like Christmas, Donna Hill and Francis Ray bring us holiday cheer with two novellas in one volume: Rockin’ Around That Christmas Tree and The Wish.

Rockin’ Around That Christmas Tree by Donna Hill

Denise has always been the faithful wife and dutiful mother for the twenty-plus years she’s been married to Edward. But now, she’s ready to live a few dreams of her own. When Denise drops the bomb at Thanksgiving dinner that she is leaving Edward and selling the house, everyone is stunned, and her announcement opens the door to Morrison Family Dysfunction 101. But Edward is not ready to give up on them. Not only does he plan to be back at home and in their bed, but he also knows that, come Christmas, he and Denise will be rockin’ around that Christmas tree.

The Wish by Francis Ray
Be careful what you wish for. That’s the lesson brokenhearted Nicholas Darling learns when an eccentric old woman grants him a wish for true love—if he doesn’t fail to see it.

Francis Ray: Francis Ray (1944-2013) is the New York Times bestselling author of the Grayson novels, the Falcon books, the Taggart Brothers, and Twice the Temptation, among many other books. Her novel Incognito was made into a movie aired on BET. A native Texan, she was a graduate of Texas Woman's University and had a degree in nursing. Besides a writer, she was a school nurse practitioner with the Dallas Independent School District. She lived in Dallas. "Francis Ray is, without a doubt, one of the Queens of Romance." --Romance Review|||Donna Hill, author of books including Divas, Inc. and In My Bedroom, lives in Brooklyn, New York. She has more than fifty published titles to her credit, three of which (Intimate Betrayal, Masquerade, A Private Affair) were adapted for television. She has been featured in Essence, the Daily News, USA Today, Today's Black Woman, and Black Enterprise, among many others.