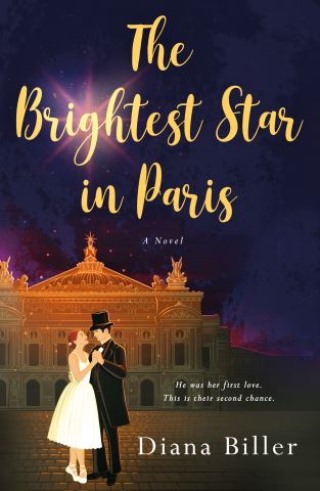 The Brightest Star in Paris

Diana Biller's The Brightest Star in Paris is a thrilling story of first loves and second chances.

She never expected her first love to return, but is he here to stay?

Amelie St. James is a fraud. After the Siege of Paris, she became “St. Amie,” the sweet, virtuous prima ballerina the Paris Opera Ballet needed to restore its scandalous reputation, all to protect the safe life she has struggled to build for her and her sister. But when her first love reappears looking as devastatingly handsome as ever, and the ghosts of her past quite literally come back to haunt her, her hard-fought safety is thrown into chaos.

Dr. Benedict Moore has never forgotten the girl who helped him embrace life after he almost lost his. Now, years later, he’s back in Paris. His goals are to recruit promising new scientists, and maybe to see Amelie again. When he discovers she’s in trouble, he’s desperate to help her—and hold her in his arms.

When she finally agrees to let him help, they disguise their time together with a fake courtship. Soon, with the help of an ill-advised but steamy kiss, old feelings reignite. Except, their lives are an ocean apart. Will they be able to make it out with their hearts intact?

"I foresee years of excellent storytelling from Diana Biller; the certainty of that excites me." - Smart Bitches, Trashy Books

Diana Biller: Diana Biller is the author of The Widow of Rose House and The Brightest Star in Paris. When she isn’t writing, she enjoys snuggling her animals, taking “research” trips abroad, and attending ballet class. She lives with her husband in Los Angeles.