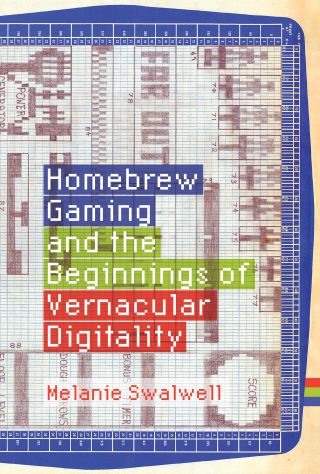 Homebrew Gaming and the Beginnings of Vernacular Digitality

The overlooked history of an early appropriation of digital technology: the creation of games though coding and hardware hacking by microcomputer users.

From the late 1970s through the mid-1980s, low-end microcomputers offered many users their first taste of computing. A major use of these inexpensive 8-bit machines--including the TRS System 80s and the Sinclair, Atari, Microbee, and Commodore ranges--was the development of homebrew games. Users with often self-taught programming skills devised the graphics, sound, and coding for their self-created games. In this book, Melanie Swalwell offers a history of this era of homebrew game development, arguing that it constitutes a significant instance of the early appropriation of digital computing technology.

Drawing on interviews and extensive archival research on homebrew creators in 1980s Australia and New Zealand, Swalwell explores the creation of games on microcomputers as a particular mode of everyday engagement with new technology. She discusses the public discourses surrounding microcomputers and programming by home coders; user practices; the development of game creators' ideas, with the game Donut Dilemma as a case study; the widely practiced art of hardware hacking; and the influence of 8-bit aesthetics and gameplay on the contemporary game industry. With Homebrew Gaming and the Beginnings of Vernacular Digitality, Swalwell reclaims a lost chapter in video game history, connecting it to the rich cultural and media theory around everyday life and to critical perspectives on user-generated content.

Melanie Swalwell: Melanie Swalwell is Professor of Digital Media Heritage at Swinburne University of Technology in Melbourne, Australia. She coedited Fans and Videogames: Histories, Fandom, Archives and The Pleasures of Computer Gaming: Essays on Cultural History, Theory and Aesthetics.