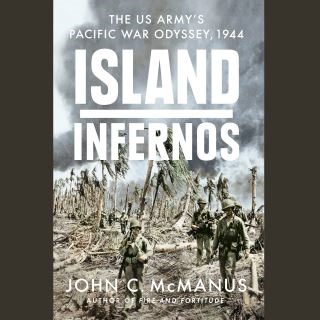 From the author of Fire and Fortitude, the continuation of the US Army's epic crusade in the Pacific War, from the battle of Saipan to the occupation of Japan

John C. McManus's award-winning Fire and Fortitude enthralled readers with an unforgettable and authoritative account of the US Army's evolution during the Pacific War, from the devastation of Pearl Harbor to the bloody battle for Makin Island in 1943. Now, in this second and final volume, he follows the Army as they land on Saipan, Guam, and Okinawa, climaxing with the American return to the Philippines, one of the largest, most complex operations in American history and one that would eventually account for one-third of all American casualties in the Pacific-Asia theater.

Brilliantly researched and written, the narrative moves seamlessly from the highest generals to the lowest foot soldiers and in between, capturing the true essence of this horrible conflict. It is a masterful history by one of our finest historians of World War II.

John C. McManus: John C. McManus is a military historian and award-winning author of eleven previous books, including September Hope and Hell Before Their Very Eyes. He holds a PhD in American and Military History from the University of Tennessee, where he served as Assistant Director of the Center for the Study of War and Society. He is currently a full professor of U.S. Military History at Missouri University of Science and Technology, where he teaches a variety of courses, including one on World War II and another on the Modern American Combat Experience.