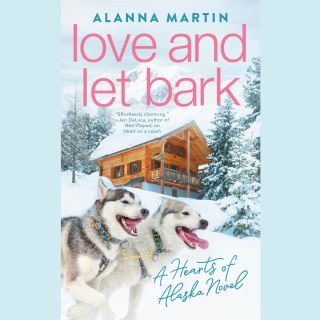 It's up to two rescue husky puppies to convince their owners it's never too late for a second leash on love.

When Nate Porter left Helen, Alaska, to become a firefighter with the Forest Service, he claimed it was because he craved adventure. The truth was, he couldn't stand to hang around, pining for a girl the town's century-old feud meant he could never have. But Nate got over Lydia Lipin years ago, or so he thought until he learns that an old rival has come sniffing around. The solution—a trip home with his rescue puppies to prove to himself he completely extinguished that old flame.

Lydia Lipin has always been satisfied being the "good" Lipin daughter—dutiful, practical, and always putting others before herself. But that role begins to chafe as Nate's return ignites old memories. No one in town knew about their secret friendship or those forbidden kisses they stole the summer after graduation. Suddenly, Nate and his puppies are everywhere, and sparks are flying.

When Nate realizes he never got over Lydia, he'll risk everything for a second chance. But Lydia's not a risk-taker, and she has to make a choice—play it safe and pretend their summer fling was just puppy love, or step out of the family shadow and unleash her heart.

Alanna Martin: Growing up, Alanna Martin wanted to be an astronaut, a doctor, and an actor—possibly all at once. After nine years of studying psychology, she somehow became a writer instead. This turned out to be the best career choice of all because she can work in her pajamas while drinking wine. She firmly believes in the power of fluffy books, long walks in the woods, and that there's no such thing as too much coffee.