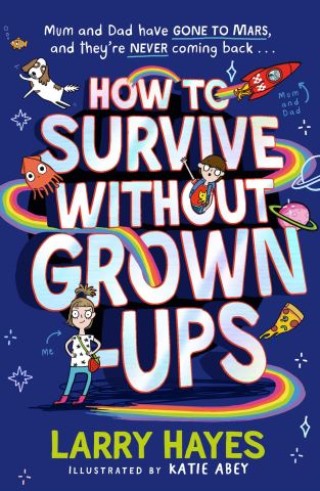 How to Survive Without Grown-Ups

Get set for the new hilarious out-of-this-world adventure series for readers aged 8+ – this is the perfect new series for fans of Tom Gates, David Solomons and Star Wars! Highly illustrated throughout by the brilliantly funny Katie Abey.

But this isn’t one of Dad’s weird jokes; it’s REAL. It’s up to ten-year-old Eliza and her genius little brother, Johnnie, to find out what’s going on, and launch a rescue . . .

Can they handle vampire squids, a suspicious villain, a secret island full of traps and a trip into space? And – more importantly – will they ever get their parents back?

The funniest, zaniest, most out-of-this-world adventure you’ll read all year!

Larry Hayes:
Larry Hayes helps run an investment fund, and is a trustee for a homeless charity. On Fridays he homeschools his two kids, letting them decide what to study. In the future he hopes to become a treasure hunter, invent a yoghurt that makes you happy, and solve the maths behind the human brain. How to Survive Without Grown-Ups is his debut novel.