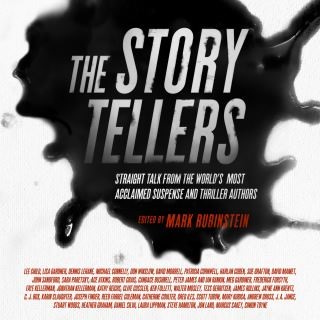 Have you ever read a suspense novel so good you had to stop and think to yourself, “How did the author come up with this idea? Their characters? Is some of this story real?” For over five years, Mark Rubinstein, physician, psychiatrist, and mystery and thriller writer, had the chance to ask the most well-known authors in the field just these kinds of questions in interviews for the Huffington Post.

Collected here are interviews with forty-seven accomplished authors, including Michael Connelly, Ken Follett, Meg Gardiner, Dennis Lehane, Laura Lippman, and Don Winslow. These are their personal stories in their own words, much of the material never before published. How do these writers’ life experiences color their art? Find out their thoughts, their inspirations, their candid opinions. Learn more about your favorite authors, how they work and who they truly are.

After earning a degree in business administration at NYU, Mark Rubinstein served in the US Army as a field medic tending to paratroopers of the 82nd Airborne Division.

After his discharge he returned to college, went to medical school, and became a physician, then a psychiatrist. As a forensic psychiatrist, he was an expert witness in many trials. As an attending psychiatrist at New York Presbyterian Hospital in New York City and a clinical assistant professor of psychiatry at Cornell, he taught psychologists, psychiatric residents, nurses, and social workers while practicing psychiatry.

Rubinstein’s high-octane thrillers Mad Dog House (2012) and its sequel, Mad Dog Justice (2014), were both finalists for the Foreword Book of the Year Award. His novella The Foot Soldier won the silver award in the 2014 Benjamin Franklin Awards competition, in the Popular Fiction category. His novella Return to Sandara (2014), won the gold IPPY Award for Suspense/Fiction. The Lovers’ Tango won the gold medal in Popular Fiction at the 2016 Benjamin Franklin Awards. His most recent novel is Mad Dog Vengeance (2017), the last book in the Mad Dog trilogy.

Before turning to fiction, he coauthored five self-help books on psychological and medical topics.

His latest nonfiction books are Bedlam’s Door (a finalist for the 2017 Benjamin Franklin Award in Nonfiction) and Beyond Bedlam’s Door. Both are sets of stories about patients he’s treated or evaluated as a psychiatrist and forensic psychiatrist.

His most recent book is a nonfiction work entitled The Storytellers: Straight Talk from the World’s Most Acclaimed Suspense and Thriller Authors, a compilation of candid interviews with writers whose novels have been worldwide bestsellers.

He now writes fiction and nonfiction, has been a contributor to the Huffington Post, was a contributor to Psychology Today, contributes columns to Literary Hub’s Crime Reads, and is a book reviewer for the New York Journal of Books.