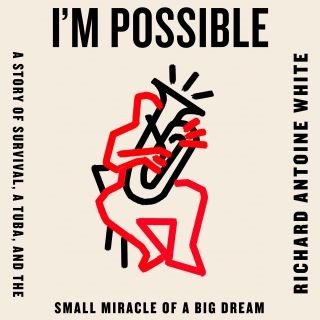 A Story of Survival, a Tuba, and the Small Miracle of a Big Dream

Includes original music from the documentary R.A.W. Tuba, as well as the author playing.

From the streets of Baltimore to the halls of the New Mexico Philharmonic, a musician shares his remarkable story in I'm Possible, an inspiring memoir of perseverance and possibility.

Young Richard Antoine White and his mother don't have a key to a room or a house. Sometimes they have shelter, but they never have a place to call home. Still, they have each other, and Richard believes he can look after his mother, even as she struggles with alcoholism and sometimes disappears, sending Richard into loops of visiting familiar spots until he finds her again. And he always does—until one night, when he almost dies searching for her in the snow and is taken in by his adoptive grandparents.

Living with his grandparents is an adjustment with rules and routines, but when Richard joins band for something to do, he unexpectedly discovers a talent and a sense of purpose. Taking up the tuba feels like something he can do that belongs to him, and playing music is like a light going on in the dark. Soon Richard gains acceptance to the prestigious Baltimore School for the Arts, and he continues thriving in his musical studies at the Peabody Conservatory and beyond, even as he navigates racial and socioeconomic disparities as one of few Black students in his programs.

With fierce determination, Richard pushes forward on his remarkable path, eventually securing a coveted spot in a symphony orchestra and becoming the first African American to earn a doctorate in music for tuba performance. A professor, mentor, and motivational speaker, Richard now shares his extraordinary story—of dreaming big, impossible dreams and making them come true.

Richard Antoine White: Richard Antoine White began his tuba studies at the Baltimore School for the Performing Arts, where he graduated with honors. He went on to receive his bachelor's degree at the Peabody Conservatory of Music, and his master's and doctoral degrees at Indiana University. Dr. White was principal tubist of the New Mexico Symphony Orchestra from 2004 until its untimely demise in 2011. He is now principal tubist of the Santa Fe Symphony and is in his tenth season as principal tubist of the New Mexico Philharmonic. He enjoys teaching at the University of Mexico, where he is associate professor of tuba/euphonium.