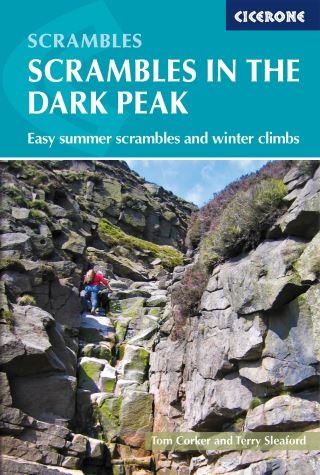 Scrambles in the Dark Peak

This guide describes 41 scrambles in the Dark Peak and Roaches areas of the Peak District, most of which can be done all year round. The selection of routes are graded 1 to 3, offering a range of scrambles to suit all abilities. Easy routes are suitable for adventurous walkers with good fitness and navigation skills, while harder routes require some climbing experience. Both classic and lesser known routes are featured, taking in areas such as Kinder Scout, the Wilderness Gullies, Bleaklow, Chew Valley and Crowden. Route description, together with information on approach, link routes, variants and extensions, is accompanied by extracts of 1:25,000 OS mapping. Also included is practical information regarding safety, equipment, access and conservation. The UK's first designated national park, the Peak District has long been famed for its walking and climbing opportunities. Perhaps lesser known are the routes that lies somewhere in between - the 'hand's on' ascents that offer the thrill of an adventurous line without venturing on to the climber's crags. This guide showcases some of the best routes in the Dark Peak, perfect for those looking for a change from the well-trodden paths that lead to the moorland tops.

Terry Sleaford: Terry was 23 years old when he climbed his first routes in the Peak District and his climbing career soon peaked at leading v.diffs! After a few years of being dragged up harder routes, he decided that the life of a 'crag rat' was not for him. A weekend in Snowdonia in the late 1970s opened his eyes to other possibilities and he began to restrict his climbing activity to trips to Wales, the Lakes and the highlands and islands of Scotland, gradually extending his skills to include winter snow and ice-climbing. As he got older, the combination of a walk into the mountains, followed by a few hundred feet of steady scrambling to reach the summit, became his idea of a good day out. Over the past 45 years he has spent many a day on the crags and moors of the Peak District.|||Tom has been walking and climbing in the Peak District for over 50 years as well as having extensive Alpine and British mountaineering experience in both summer and winter. He has developed a great affection for these Moorland places at all times of the year and in all weathers. Alone, or with friends, he has realised how varied and interesting are the opportunities for having great 'hands-on' fun using all the skills used in the bigger mountains.