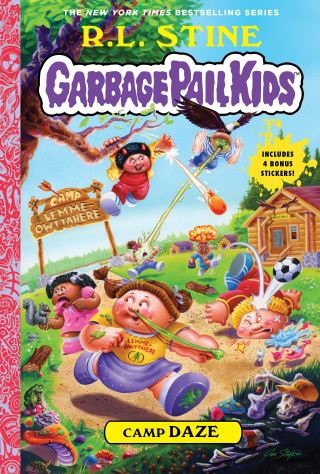 Welcome to the town of Smellville, where ten kids all live in a big tumbledown house and have as much fun as they possibly can. People may think that they’re gross and weird and slobby and strange, but they’re not bad kids—they just don’t know any better. In this hilarious series from bestselling author R.L. Stine, the Garbage Pail Kids—from Adam Bomb to Brainy Janey—get into mischief at their middle school. These all-new illustrated stories are guaranteed to amuse and entertain readers of all ages.

R.L. Stine:
R.L. Stine has more than 400 million English-language books in print, plus international editions in 32 languages, making him one of the most popular children’s authors of all time. Besides Goosebumps, he has written series including Fear Street, Rotten School, Mostly Ghostly, The Nightmare Room, and Dangerous Girls. R.L. Stine lives in New York with his wife, Jane, an editor and publisher. The Topps Company, Inc., the originator of Garbage Pail Kids, is the preeminent creator and brand marketer of sports cards, entertainment products, and distinctive confectionary. Check out GPK via social media: #garbagepailkids, facebook.com/GarbagePailKids, garbagepailkids.com. Cover artist Joe Simko and interior illustrator Jeff Zapata are longtime, fan-favorite GPK artists with worldwide followings.